It’s a minor thing, but with regards to UX and usability - it may not be intended at all.
Here’s a user group where I disabled a few things, like Lists: 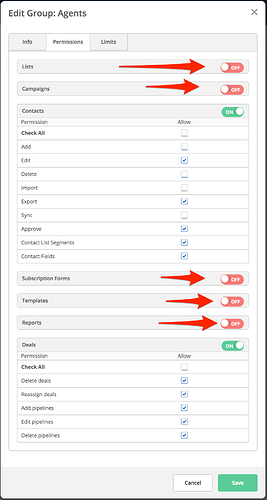 But when the user logs in, he sees this:

First, Automation doesn’t have an access privilege setting for admins, but decides to show up anyway. So the user clicks on it and he doesn’t see any automations, but has full access to see messages - and delete or edit those messages that are in the whole account.

Not only that but now there’s two new menu items on the top that aren’t supposed to be there because I turned them off in the access privileges for this group.

Basically, this kind of access privilege is necessary because I want to give the users one or two jobs other than using the CRM. So campaign & automation management would be managed invisibly. All they would do is work in the Deals section literally. The additional work would be to add tags to contacts.

And regarding the pipelines, I know you’re building the privs in there but my goal is to use a “Scored Pipeline” for MQLs. What this means is if the lead was scored between 1-33, it stays in the “Cold Lead”, 33-66 “Warm Lead”, 66-100 “Hot Lead” at which point, like a waterfall - this lead would be tasked to a user in the aforementioned group and moved into a “Leads” pipeline that they see.

They don’t see the Scored Pipeline because it’s not relevant to them, but if they see an individual contact record once the contact is in the “Leads” pipeline, they can see the activity history which I guess is enough for them.

This can even pave the path for reports like this: 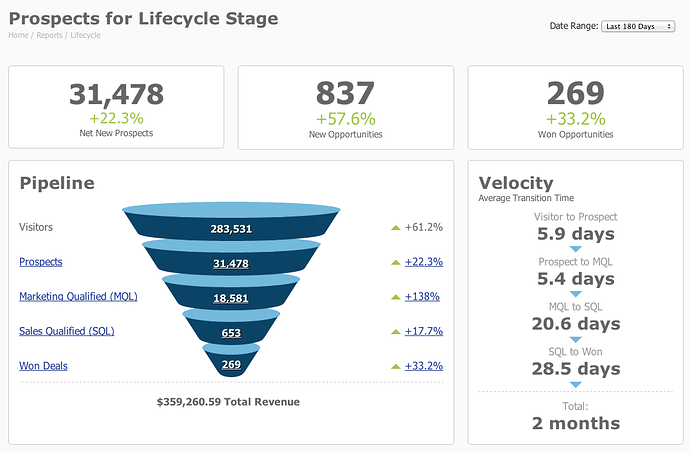 Thank you very much for the detailed feedback.

I’ll look these over and make sure our developers take a look and see what we can do.

Is this funnel available in AC at the moment?

Hi @flowbird. Unfortunately, not a view like this. There’s not much charting in AC at the moment.

So, I was looking at this Success Hour webinar (ps: all those webinar’s recording quality could do better) and it shows you the how having access privileges for Sales reps would actually help a lot.

Go to 21:20 and see that Megan brought everyone into the Pipeline view. And then go back a little and you’ll see all the automations she had on for the Sales reps.

Then, towards the end there was a discussion on “What would you do if a contact walks in to the office, how do we handle it?”. The better answer, by Kelly, was to let the Sales teams do what’s instintive to them; move the contact in stages. And have automations in the backend that apply the necessary tags when the contact gets moved.

This, in my opinion, is a great look into how privileges and waterfall pipelines can help.

If the user privileges existed, all this backend automation stuff can be hidden from the sales teams effectively giving them “blinders” so to speak. This helps them focus on what they do best, and reduce blowback/friction on having to use AC because they find it “overwhelming”.

This overwhelming part is actually psychological because they won’t really be touching anything but the “Deals”, yet they find it overwhelming due to the presence of other tabs. Almost like walking in a room for an interview, only one guy asks the questions, but the room consists of 10 other silent members. Intimidation level skyrockets! lol

Hey guys, just saw this guide which talks about permissions, and I see some things have been fixed.

But there’s still some remaining issues:

These, in my opinion are the last 3 reasons before I can add sales guys into AC to begin using Deals & AC Chrome plugin.